As you may be aware, NATS (National Air Traffic Services) and London Luton Airport have enacted the Swanwick Airspace Improvement Programme,  which separates the Stansted and Luton arrival flows and extends the flight path for the approach into Luton into airspace above the Cambridge area. This has led to an increase in air traffic over Hilton, with the resulting increase in noise.

The implementation of the Programme is now at its final stage, with the Civil Aviation Authority conducting a 12-month Post-Implementation Review examining how the airspace change has performed, and whether the anticipated impacts and benefits have been delivered.

Anyone with a noise complaint can use Luton airport’s TraVis system to make a report online, whether about noise in general or a specific noise incident. To report other environmental disturbances, phone 01582 395382 or email .

The UK Civil Aviation Authority (CAA) has approved an airspace change including changes relating to London Luton Airport’s Standard Instrument Arrivals (STARs).  This airspace change is intended to reduce the complexity of the airspace and the workload on air traffic controllers, which in turn, is designed to mitigate against the potential of delays for both London Luton Airport and London Stansted arrivals and allow a high level of safety in air traffic services to be maintained.

The revised airspace will become effective on 24 February 2022.

Further information can be found on the CAA’s airspace change portal. Full reasons for the CAA’s decision, including technical assessment will shortly be available on the ACP portal.

Hilton Parish Council has received correspondence from NATS regarding this change which states that they have decided to progress Option One, which means minimal changes from today’s flight paths below 5,000ft, and greater dispersion of flights above 5,000ft. The location and orientation of the new holding area near the A1-A14 junction has been adjusted and the lowest standard altitude of the hold raised by 1,000ft, reducing potential noise impacts on the residents of St Neots and Huntingdon.

The updated design is fully explained in their Step 4A(i) document, and an accompanying technical map is available to directly compare the consulted design with the final design (before and after layers can be switched on and off).  They also provide a Final Options Appraisal document, which describes the cost benefit analysis in terms of quantified and monetised impacts and benefits.

This completes the three-stage, ‘we asked, you said, we did’ consultation process, and the final design will now be submitted for approval to the Civil Aviation Authority (CAA) in line with the airspace change process. Subject to CAA regulatory approval, the proposal is planned for implementation no earlier than February 2022.

All of the documentation can be found on the CAA’s portal here: https://airspacechange.caa.co.uk/PublicProposalArea?pID=51

Hilton Parish Council have received responses to this consultation from both Cambridgeshire County Council and Jonathan Djanogly MP. You can read these responses below:

The consultation into the proposed changes to the arrivals routes at London Luton airport closes on Friday 5th February. Hilton Parish Council urges all parishioners to respond to this consultation.

Further details can be found at: https://consultations.airspacechange.co.uk/london-luton-airport/ad6_luton_arrivals/

This is the response that the Parish Council have sent to this consultation:

Hilton Parish Council objects to the proposals put forward by NATS to create a new flight hold pattern above the area to the west of Huntingdon.

The Parish Council’s objection refers to the proposed re-routing of air traffic approaching from the south and east along a new corridor that appears to follow the route of the A14 from Cambridge to Huntingdon.

Having raised a query with NATS concerning noise pollution we are aware that no consideration is made for the increased noise pollution the village is already suffering following the opening of the new A14 southern bypass which is within 800m of the village. The proposed new flight path in air space which is mostly clear of traffic will only serve to compound noise levels and no consideration is made to this.

There appears to be no information in the consultation regarding the effect of increased flight distances for aircraft using the new approach routes (either option 1 or 2).

For traffic arriving from the south, it would add approximately 30 track miles to each arrival thus increasing fuel burn and CO2 emissions on each sector. For arrivals from the east, only around 15 track miles are added but again it is an increase in fuel burn for each flight. Increased fuel burn would be on average around 90 litres per flight and when using the figure suggested by NATS of 100 – 130 flights a day using the corridor this equates to an additional 9000 to 13000 litres of fuel a day or 3,285,000 to 4,745,000 per annum.

If the application to expand Luton airport were to be successful  the potential number of flights along this corridor would increase, using NATS basis of calculation, to up to 200 flights per day or 18,000 litres per day or 6,570,000 litres per year. There does not appear to be any consideration for this non environmentally friendly increase in the consultation document.

In addition there is no consideration for any of the communities affected by these proposals. The creation of the new hold in what is presently unused air space benefits only Luton airport,  it ignores the blight that will be brought on settlements.  From the airspace structure proposed, aircraft could be expected over the villages along the A14 corridor at 8000′ heading towards the hold. Data from NATS shows that noise levels would be expected around 50-60dBA, equivalent to a “busy general office” to a “quiet office”. Most movements into Luton are currently Airbus A319/320 series from easyJet and A320/321 from Wizzair. The same NATS source (https://www.nats.aero/environment/aircraft-noise/) has examples of noise including an Airbus A319 at 13,000ft (higher than expected in the proposal) at 59.0dBA. This would be a new a “busy general office” noise pollution at quiet evening hours when residents are typically attempting to sleep. August 2019 had roughly 220 movements per day, most of which would be using this new arrival with the peak traffic flow in the run up to the 2300 night restriction.

Notwithstanding noise, the increase of many hundreds of aircraft transiting overhead the villages would increase exhaust particulates here. Although the DfT prioritises noise and pollution from aircraft below 4000ft, it is still a significant increase for the area.

Finally, Hilton Parish Council would like to make reference to the poor consultation which appears to be presented as a ‘fait accompli’ with no alternative options. 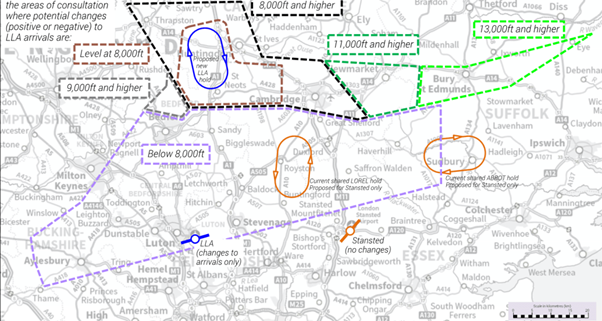 Currently, Stansted and Luton airports share arrival holds and routes.  It is unique for two major airports of this size to share arrival routes, and the two airports are now handling much more traffic than the airspace was designed for.

The ‘AD6 arrivals change’ proposal will separate the arrival flows for the two airports and establish a new hold for Luton traffic.  Both Stansted and Luton currently suffer from knock-on delays where any delay at one airport, either in the air or on the ground, impacts the other and can cause further delay, noise, and emissions.  Separating the routes will maintain a safe and predictable path into each airport and reduce these knock-on delays.

Despite the current crisis this airspace is some of the busiest and most congested in Europe, and the proposed change will ensure Luton airspace operates effectively and efficiently into the future.  This consultation is an opportunity for residents to help shape that proposal.

As the proposed flight paths are to the south, there is likely to be little impact in Huntingdonshire. However, the plans also include a new holding pattern for the airport which is intended to be over the south-western corner of Huntingdonshire (broadly circling round the line of the A1 from St Neots to Alconbury). The intention is that aircraft in the holding zone will be flying at a height of over 8,000 feet and the consultation document sets out a position that this will not present a nuisance, either in terms of noise or pollution.

NATS stakeholder mapping indicates that Hilton may be affected by this proposal.

This consultation will run until 5th February 2021.  The formal consultation website can be accessed at https://consultations.airspacechange.co.uk/london-luton-airport/ad6_luton_arrivals/

Further information can be found within the Virtual Exhibition, in which there are videos, banners, downloadable materials, and a postcode look up tool. Individuals can also sign up to live webinars through the virtual exhibition.

Hilton Parish Council have sent letters to Jonathan Djanogly MP, NATS, Cambridgeshire County Council and Huntingdonshire District Council. A copy of these letters is attached to this post.

Hilton Parish Council would like to urge parishioners to respond to this consultation with their views.

This meeting will be in Hilton Village Hall.

This site uses cookies. By continuing to browse the site, you are agreeing to our use of cookies.

We may request cookies to be set on your device. We use cookies to let us know when you visit our websites, how you interact with us, to enrich your user experience, and to customize your relationship with our website.

Click on the different category headings to find out more. You can also change some of your preferences. Note that blocking some types of cookies may impact your experience on our websites and the services we are able to offer.

These cookies are strictly necessary to provide you with services available through our website and to use some of its features.

Because these cookies are strictly necessary to deliver the website, you cannot refuse them without impacting how our site functions. You can block or delete them by changing your browser settings and force blocking all cookies on this website.

We also use different external services like Google Webfonts, Google Maps and external Video providers. Since these providers may collect personal data like your IP address we allow you to block them here. Please be aware that this might heavily reduce the functionality and appearance of our site. Changes will take effect once you reload the page.